"Perhaps the most impressive of all the cookbook blogs are the three devoted to the 2004 edition of Gourmet magazine's "The Gourmet Cookbook" -- all 5¼ pounds and 1,300-odd recipes of it. Befitting this culinary Everest, all three writers are overachievers in their professional lives."

"I should have told you before how much I've been enjoying reading your thoughts. You seem like such a great cook." 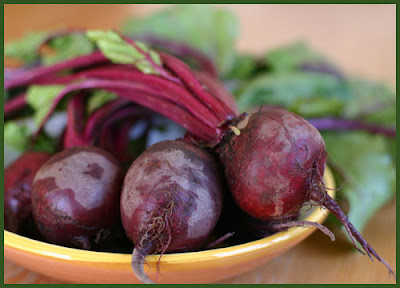 Beets are one of those vegetables that seem sort of limited in their prospects. You can boil them. You can roast them. You can shred them. (oh, and you can make a blender drink out of them, which a Brazilian co-worker did for me once at Yanks, as a health drink, and let me testify right now to the purgative qualities of raw, blenderized beets. Good lord.)

But with all of these options the beets themselves retain their essential beet-y flavor--sweet and mild.

Beets with Lime Butter changes that. It's a simple dish--takes all of 15 minutes--but it completely transforms the flavor of beets.

OK, not completely. But the acid from the lime juice (1 tablespoon) and zest (1/4 teaspoon), and the indescribable goodness of butter (three tablespoons) combine to lift shredded, sauteed beets into a different, more interesting realm.

If you love, or even just like beets, give this one a try.

The Gourmet Cookbook offers not one version of mashed potatoes, but six. It would be silly not to, since there are so many awesome ways to make mashed potatoes.

This particular variation called for goat cheese, and since I rarely make mashed potatoes (we tend towards low-carb eating at home) and since I rarely have goat cheese hanging around (but recieved some as part of a gift) I decided to get decadent and go for Mashed Potatoes with Goat Cheese.

Oh, people. Especially people who love mashed potatoes. The best mashed potatoes have so much fat in them that you really just don't want to know about it. These were no exception. Butter (lots), milk (lots, though in my case it was half and half + soy milk), goat cheese. Just close your eyes, open your mouth, and resolve to exercise tomorrow.

They were so good.

I have to mention the debate amongst professional mashed potato makers (chefs) about the order in which you add the ingredients. Actually, everybody has a big, fat opinion about the entire process. Cold water starts. Cooking the potatoes in their jackets vs. without. How long you let them dry out in the colander. Some people swear you MUST add the butter first, to coat the potatoes, before you add the milk. How much milk to add, to keep them loose enough for dinner service. Not to even get into WHAT you add, whether or not to mash them with the skins, whether or not to whip them or keep them chunky.

I was happy to see that Gourmet didn't even dive into this debate. Peel the potatoes, they say, boil them in well-salted water, drain, and mash with butter, milk, salt and pepper that you've previously heated. (if you want to avoid dirtying two pans, just melt the butter and heat the milk in the pot the potatoes were just in, while the potatoes are draining in the sink.)

It's good stuff, people. If you make them now, you can start getting into that Thanksgiving mindset... 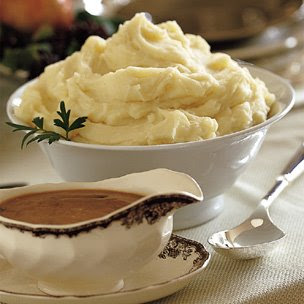 Posted by Melissa Bach Palladino at 9:03 AM

I have been enjoying reading your blog for a couple of weeks now. Thanks for sharing!
I LOVE mashed potatoes so will try these for sure but have a question, does the goat cheese get mixed during mashing or just dressed on top?
Again, thank you

The goat cheese gets mashed in--it just melts right into the potatoes along with the milk and butter. I don't have the recipe right in front of me but I'm pretty sure it's 4 oz. of goat cheese for 2 lbs. of potatoes, but of course it's all ultimately about what you want. I love goat cheese too. Enjoy!

Do you have an opinion on the masher/ricer/food mill debate? 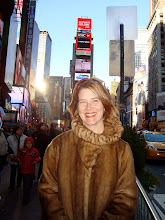 Not Just Another Pretty Face: My Cooking CV

Judges for the Pulitzer Prize and MacArthur Genius Grants can find some of my fiction here:

Fiction agents! Editors! Ask me about my novel-in-progress! mbpalladino@gmail.com 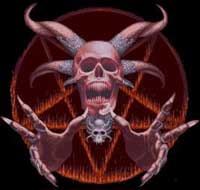 a chef sells his soul to the devil...

Kitchen Gadgets I Can't Live Without

These tools make life in the kitchen so much easier!

Hate transferring soups to blenders or food processors? Immersion blenders (also known as stick blenders) let you keep the soup in the pot. 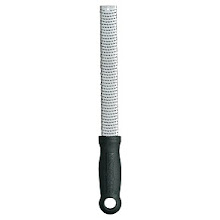 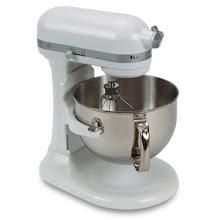 There's no substitute when you're baking, and the dough hook prevents wear and tear on forearm and wrist muscles.

Links worth clicking on